One of my main concerns during my recent visit to Czernowitz, was the GPS tracking, mapping and measuring of the Czernowitz Ghetto, combined with a photo documentation. In fact, this action took me three days for a distance of 14,591 meters, compiled to a video slide show of 08:22 minutes. 200 photos, giving a vague idea of bygone days, accompanied with the song "Shtetls" by John Zorn from his album Filmworks XX Scholem Aleichem.

The GPS tracking, mapping and measuring is based on Corneliu Calotescu's order and its cartographic implementation. The order contains a firing order concerning Jews, who will not be in the Czernowitz Ghetto 6 PM. Please click on the pictures/maps below to enlarge. 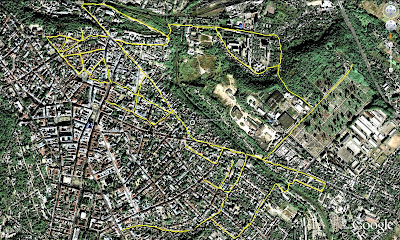 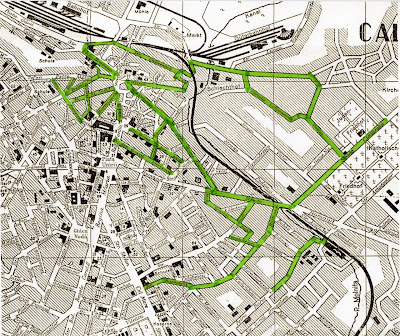 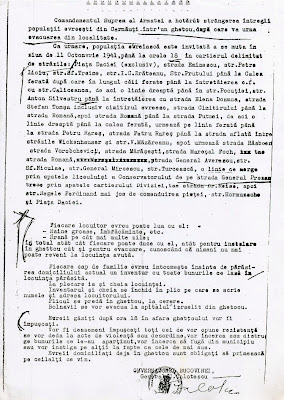 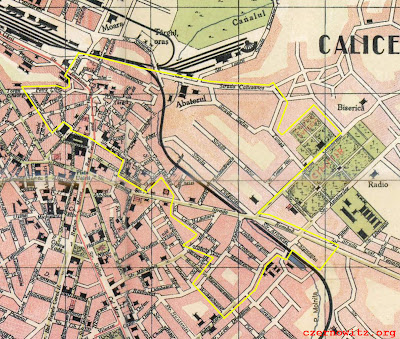 A Temporary Ghetto was Established

On Saturday 11 October of the current year local Jews living on streets in the upper and central parts of the city were transported into a quarter around the cemetery and the station and in the streets of the Jewish Quarter. The following demarcation lines were established for this temporary ghetto:
From Piata Decebal (excluded) - Eminescu Street - Sfanta Treimii Street till Petre Liciu Street - I.C. Bratianu Street - Prutului Street along the railroad line - A. Vireanu Street - Elena Doamna Street - Stefan Tomsa Street near the Jewish Cemetery - Ramana Street bridge till Petru Rares Street- Petru Rares Street till Maramuresului Street - Razboieni Street - Vorobchievici Street - Maresal Foch Street - General Averescu Street till Sf. Nicolae - General Mircescu Street - Turceasca Street - General Prezan Street - Reg. Ferdinand Street from the Catholic church - Hormuzachi Street - Piata Decebal (excluded).
The temporary ghetto, thus established, was separated form the rest of the city by wooden fences controlled day and night by military units and police. Jews are prohibited from leaving this ghetto. The entry and exit of other persons who have the need to pass through the ghetto is allowed only by authorization.

There is a vast number of publications related to the Czernowitz Ghetto. Please find below a selection of just a few additional links and feel free to extend this listing by your suggestions and comments: